Read more on the theme page on investment policy

Climate change poses other risks. Extreme weather is already causing more and more damage to, for example, houses, commercial buildings and vehicles. The Dutch Association of Insurers is investigating how insurers and society can respond as well as possible to the changing climate.

The weather is getting more extreme. Worldwide, insurers see the consequences of climate change reflected in their figures. For example, after the extreme hailstorms on 23 June 2016, insurers in the Netherlands received more than 100,000 damage reports in the southeast of the Netherlands. That is more than ten times as much as on a normal day. The insured damage amounted to at least 600 million euros. This included damage to houses, business premises, cars and caravans. Among other things, agricultural companies were severely affected.

Without measures, the damage burden is expected to increase considerably. In 2014, the KNMI drew up four climate scenarios. The Association calculated these and found that the private damage caused by extreme precipitation and hail alone (currently 125 million euros) could double in the coming decades if no measures are taken. This can cause problems for insurers, who see their claims burden increase. But consumers can also notice this. It could just be that premiums in certain areas increase or even that certain risks are excluded from insurance coverage.

Another problem is that some risks are now often uninsured, while those involved cannot pay for the possible damage. For example, our country is virtually uninsured against flooding.

Initiatives of the Dutch Association of Insurers

Insurance is a means to compensate for damage, but insurers can also use their expertise to make people and companies aware of the risks and to encourage them to take preventive measures. Together with partners, the Association is investigating how we as insurers and society can respond as well as possible to changing risks and keep them insurable. To this end, the Association is holding talks with ministries, regional authorities, DNB and interest groups.
For example, the Association is involved in the implementation of the National Climate Adaptation Strategy and in the evaluation of the broad weather insurance scheme. This government-subsidized insurance is one of the products with which farmers can insure crops in the open field against extreme weather. In 2017, the Association set up a special climate project group.

Positions of the Dutch Association of Insurers

According to the Association, it is necessary for a society to anticipate the consequences of climate change more. We need to design and use land and buildings differently so that we can withstand the effects of climate change as effectively as possible. This is a task for politicians, but citizens and businesses can also do a lot to limit the damage. At the same time, the Association notes that risk awareness is currently still very low. Insurers can contribute to more insight, awareness and stimulating prevention.

The Climate Monitor of the Data Analytics Centre (DAC) of the Association shows the share of weather extremes such as storm, hail, precipitation and frost in the total damage to houses, business premises and vehicles. The low water levels and wildfires due to heat are also discussed.

The increasing extreme weather causes more nuisance and damage to individuals, entrepreneurs and companies. To help citizens and businesses prevent as much damage as possible from severe weather, we share useful tips on our extreme weather prevention tipswebpage.

Climate change also causes a greater risk of flooding in our country. Such as the flooding in Limburg in July 2021. The question arises through which mechanism the resulting damage to citizens and businesses can best be compensated: public, private or a combination thereof. Compensation that is not properly arranged in advance not only causes direct damage to victims and their financiers, but also causes uncertainty, delay and additional consequential damage due to missing claims settlement processes.

In science and in other countries, there is broad consensus on the added value of insuring in the event of catastrophes such as flooding. Think not only of fast claims handling, but also the restart of an already hard-hit economy and the prior stimulation of damage reduction measures. We recently released a position paper on this.

In the Netherlands, individual insurers have so far not been able to offer full flood insurance on a large scale. This is due to insufficient awareness, anti-selection, cumulation risk and the presence of government compensation. The Covenant has put forward various initiatives in recent years, but these have failed for various reasons. In 2013, for example, the Association submitted a proposal to the Netherlands Authority for Consumers and Markets. He saw too much objection because of the mandatory nature. The countries around us do have such systems.

In 2018, the Association issued a flood advisory report. In it, it advises the insurers to also offer coverage against local flooding in the building and contents policy. It can differ per insurer whether – and how – they follow this advice. We update the information on this website on the basis of market developments around this advice. For local flooding, we have seen an expansion of the coverage since the flood advisory report (2018).

For damage caused by large rivers and sea, the majority of citizens and businesses depend on partial government support on the basis of political decision-making afterwards, via the Disaster Damage Compensation Act (Wts). This implies uncertainty with regard to payout percentage and efficient handling. The insurance sector and the government can only close the remaining 'gap' between the compensation systems together. We see a number of different solutions for this.

The low groundwater level, partly due to climate change, threatens the foundations of approximately 1 million homes and other buildings in large parts of the Netherlands. This causes damage to wooden and shallow foundations. But also on walls and frames due to subsidence of foundations. This is evident from research by Deltares.

For a homeowner, this results in an uninsured loss for repair, which can sometimes amount to 120,000 euros. As far as subsidence is concerned, the risk is so certain and large that insurance is not a solution: it is a billion-dollar risk for homeowners and their mortgage lenders. In addition to climate change, groundwater level management and foundation types also play a role. That is why national control is needed, which insurers are advocating together with a broad coalition.

Climate damage is not always insurable, the Netherlands Authority for the Financial Markets (AFM) warns against this. The regulator emphasizes that the damage is increasing, but also that insurers can use help to keep the insurability as high as possible. What risks are we talking about? Climate policy advisor at the Dutch Association of Insurers, Timo Brinkman, answers this in this article.

Entrepreneurs sometimes unknowingly run climate risks that are not insured. To raise awareness, the Association has developed this 'SME Climate Proof' about the insurability of climate risks. In addition to the handy Infographic insurability climate risks, with which it is clear at a glance which damage caused by extreme weather is insurable, prevention tips and tools can also be found here. We also explain how entrepreneurs can use the insurance card to make it easier to compare insurance products with each other. 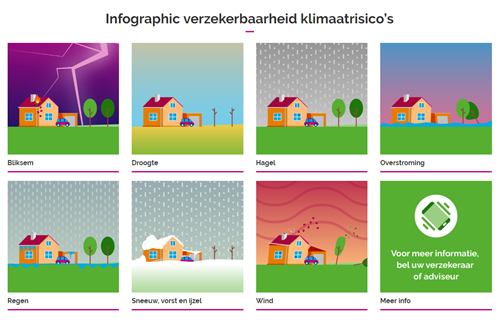