It is a day after Corrie raced over our country and caused flooded quays. At the table in the webinar studio of the Association, experts from Royal HaskoningDHV sit to talk about the insurability of the flood risk of non-primary barriers. "Customer awareness is low. People are often not even aware that they live in an uninsured area."

Commissioned by the Dutch Association of Insurers and the Vereniging Nederlandse Assurantie Beurs (VNAB), Royal HaskoningDHV conducted research into the flood risks of non-primary barriers. Policy advisor Timo Brinkman, who is also at the table, zooms in on the insurability of primary barriers. He kicks off the meeting with a brief reflection and emphasizes that there has been discussion in our country about insuring flooding for more than twenty years.
"After the flood in Zeeland (1955), flooding is excluded from the coverage. That ban was only repealed in 1998. Insurers are not eager to insure the risk, but their customers do expect coverage. Since the beginning of this century, precipitation has become widely insurable."

Timo Brinkman: "Public and private parties desperately need each other"

According to Brinkman, flooding occurs regularly between 1998 and now. Often, after such a flood or dike breach, a pole construction is immediately thought of again, but it is certain that public and private parties need each other. Until the Association comes up with an advisory report in 2018, in which it is stated that coverage of non-primary barriers is possible via the current market. "If we can insure a storm, we can also insure a local flood," Brinkman says. "In this way, we as a sector really deliver added value: we can speed up claims handling and prevent consequential damage. On the other hand, insurers can also encourage prevention and warn customers in good time."

What is the difference between a non-primary and a primary barrier?
A primary flood defence can be found directly on a large river or sea: a dike, dune or even a storm surge barrier. These primary barriers roughly protect our country from the sea and the major rivers.
A non-primary barrier, also known as a secondary or regional barrier, can be both a wet and a dry flood defence along regional rivers. An example of such a wet barrier is a quay along a bosom water. In many areas, non-primary regional barriers serve as road, mooring, pasture or recreational areas. They are often an important part of the living and living environment. Along the barrier, a lot of buildings are concentrated.
The dike shear at Wilnis (2003) was a wake-up call that the regional barriers also deserve extra attention.

The advice that the Association gives to its members in 2018 to ensure local flooding is without obligation. It can therefore differ per insurer whether and how it is followed up. It is clear, however, that an increasing number of insurers offer expansion of coverage, especially on private insurance. After the flooding of last summer in Limburg, however, the business market is also more emphatically on the agenda. Insurers and brokers have therefore started looking for more insight into the risks. Brinkman: "Reason for us, and the VNAB, to have Royal HaskoningDHV conduct an in-depth study into the risks of non-primary barriers. This study also looks at specifically built-up areas outside the dikes. Think of the port of Rotterdam as an example."

The study also looks at specific built-up areas outside the dikes, such as the port of Rotterdam.

The results of that research were shared exclusively with the members of the Association and the VNAB during the webinar in a livestream, but advisor Flood risks and adaptation Lars de Ruig of Royal HaskoningDHV sheds some light on the veil. In his research, he starts from three scenarios of non-primary barriers that can cause a lot of damage: a. a flood outside the dikes, b. a breakthrough of a regional barrier and c. a flood in the regional system. 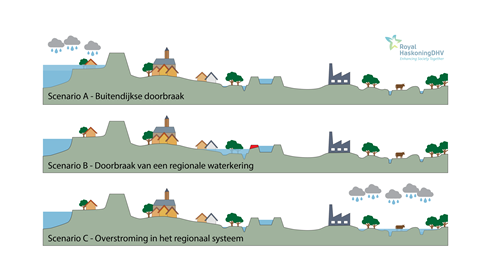 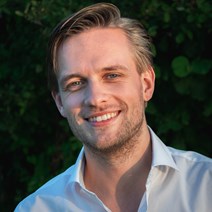 De Ruig clarifies that the amount of damage in scenario b does assume that all 2,790 barriers break through at the same time. "That's not going to happen. And if several barriers break through at the same time, this will probably be the result of a breakthrough of the primary barriers." According to De Ruig, these insights help with that. "The core for insurability of these risks lies in the right data, prevention and the prevention of concentrations."

Lars de Ruig: "Climate measures are location-sensitive. There is no one-size-fits-all"

In all three scenarios, risks could be insurable, de Ruig believes. However, he insists that many insured persons are unaware of this and do not have sufficient knowledge, while prevention can make the difference.
"In the scenario outside the dikes, we zoom in on Dordrecht. Part of the center of that city is located outside the dikes, often slightly raised and many residents have taken additional precautions. The special thing is that on one side of the dike there is no coverage from the Compensation for Damage in Disasters and Major Accidents Act , but on the other hand there is. I wonder if people realize that?"

For the large business market, finding coverage is still a puzzle. De Ruig: "There is usually no coverage on the stock exchange policies and, moreover, there is regular discussion, such as after the flooding in Limburg."
He advises insurers to make more use of individual assessments. "Certainly in combination with adaptive measures, more is often possible. In addition, the damage is limited if an insurer puts prevention and early warning more on the agenda," says De Ruig. "Climate measures are extremely sensitive to location. There is no one-size-fits-all. That is why we insist so much on these individual assessments. The best thing is if a company can already take the climate into account during construction, but you can also take plenty of measures to limit the damage in existing buildings. Think of water-retaining frames and doors. Or by applying shields in doors and windows. But also to something as simple as not placing the expensive machines on the ground floor, but moving to a higher floor. We are convinced that insurers can play a much greater role in adaptation measures, but also in prevention and early warning than they currently do."

"Insurers can play a greater role in prevention and adaptation measures"

The online GIS viewer, which De Ruig briefly explained at the end of his presentation, can help insurers and insurance brokers with the first insights. "The viewer is not suitable for stress testing, underwriting, pricing, preventive and claims management, but it can put insurers on the right track."
The online GIS viewer is accessible to all members of the Dutch Association of Insurers and the VNAB. Interest? Please contact Timo Brinkman.